The life of an essential worker at Michigan State

Michigan State's faculty and staff began working remotely in March 2020. But not all of MSU's employees are able to work from home.

Casey Serr does not know what the world of remote work is like.

The head custodian for the night crew at the Olin Health Center and his staff have continued their daily work as the world changed drastically around them and work to maintain public health on campus despite the dangers of COVID-19.

When Michigan State University announced on March 11, 2020 that they would be moving fully online due to the COVID-19 pandemic, most MSU faculty and staff began working remotely and remain working virtually to this day.

However, not all of MSU's employees, including Serr and his staff, were able to move to a virtual workspace, as their work was considered essential for MSU to continue to operate.

Serr said that he was nervous at first when he was told that he would continue to work in person but feels like Michigan State's Infrastructure Planning and Facilities (IPF) have done enough to protect the workers in a unique work environment.

"I still feel safe to this day, and I never once felt unsafe, you know," Serr said. "But IPF has been great, our management is taking the brunt of the load. So, all the hard decisions and stuff are on them, we just deal with it." 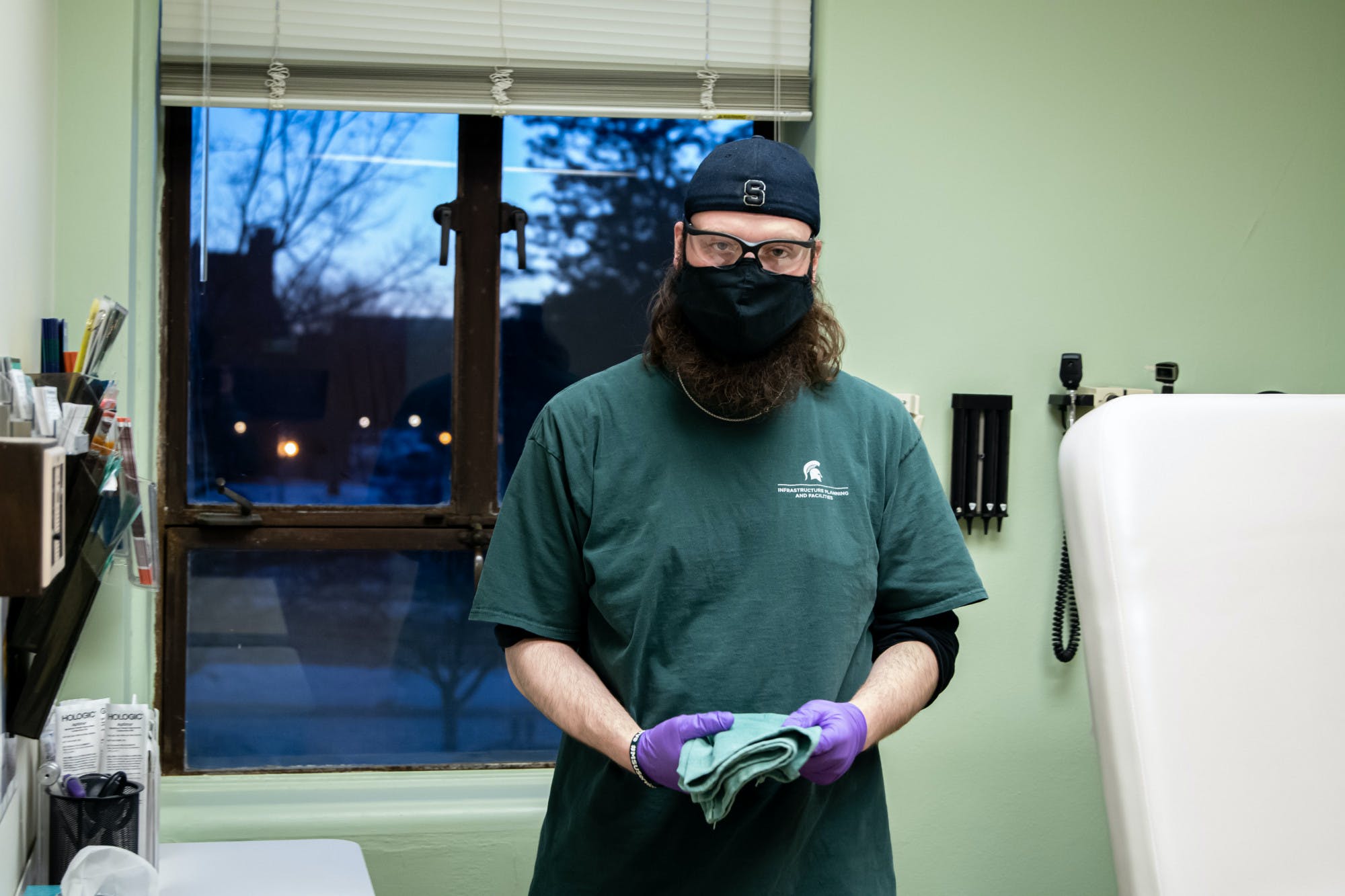 The essential workers at Michigan State have dealt with increased workloads and comprehensive changes to their jobs.

Serr said the changes in the safety protocol for essential workers include a reduction in staff, increased cleaning of all surfaces in buildings on campus and daily health screenings. According to Serr, the staff was reduced from five people to three.

According to data provided by the IPF Service Manager Brandon Baswell, IPF has reduced their total number of staff on campus from 431 people in January of 2020 to 238 as of January 2021. This was a 44.8% reduction in IPF staff overall.

"We have less than 2,000 individuals completing in-person work," Michigan State Deputy Spokesperson Dan Olsen said in an email. "About 1,600 of those are critical infrastructure employees and employees who maintain our residential operations on campus. Others include faculty teaching in-person courses, staff who support those who teach in-person classes and faculty who are dependent on university technology and on-campus resources to conduct their virtual courses."

MSU reduced overall staff numbers so that there were fewer people on campus and a reduction in cleaning responsibilities because of the lower number of students and staff currently on campus, according to Baswell.

Dealing with students has presented a unique challenge for essential workers, who have to balance their responsibilities with keeping themselves safe at work.

Some workers, such as Serr, have not had to work directly with students or faculty, and feel perfectly comfortable at work. Others have had to deal with the public first-hand and the challenges of making sure that everyone else is safe while not compromising their own health.

"There's a bunch of students that will come in and either not wear their masks properly or not social distance like they're supposed to," Luis Segueda, the sous chef at the Case Hall cafeteria, said. "So our responsibility to keep our staff safe, and to keep them safe, is to go around and make sure that they abide by the 6-foot rule."

At first, essential workers were apprehensive about having to work during the pandemic, but have grown to be more comfortable because of their confidence in Michigan State's safety protocols.

"There's always the question in your head, like, 'have I been exposed to somebody? And am I going to bring that home,' which can be a little mentally draining sometimes," Sydney Cronkhite, the store manager of the Starbucks in 1855 Place, said. "But I know that we all work together to make sure that we're as safe as possible and reducing the risk in this particular area. So in that way, I feel pretty safe. But there's always a question in the back of your mind of whether or not you've been exposed to somebody who may have the virus." 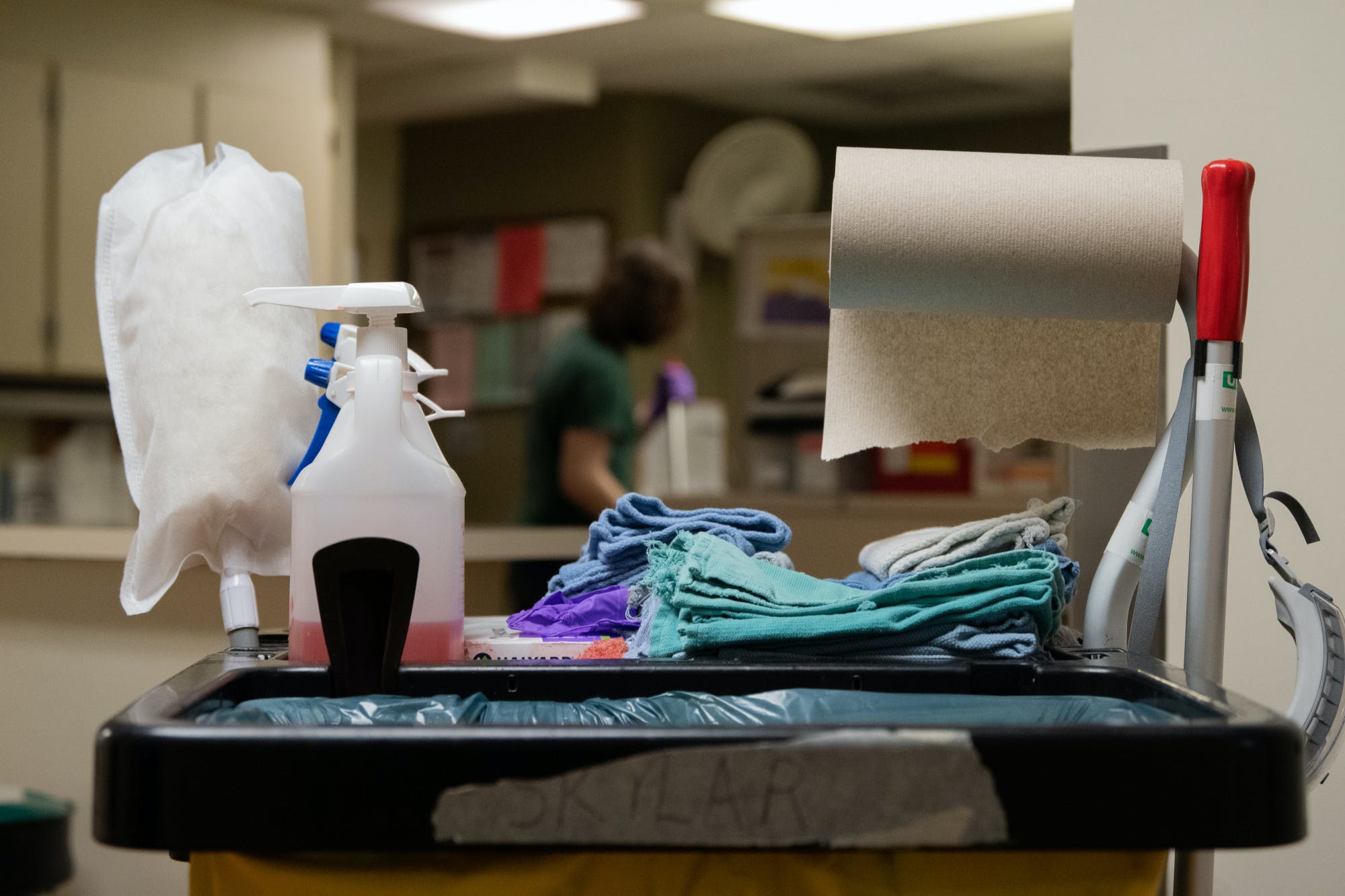 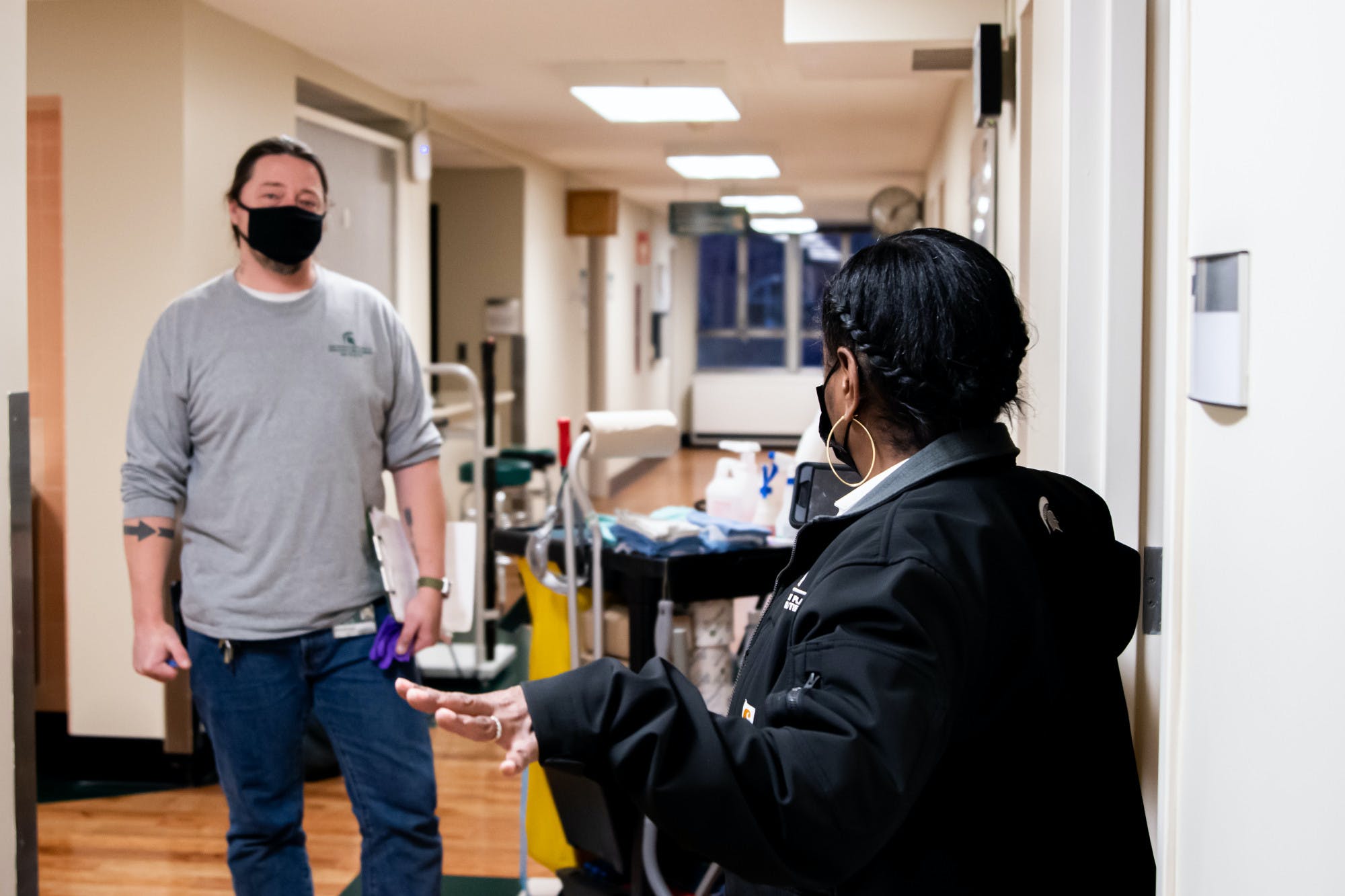 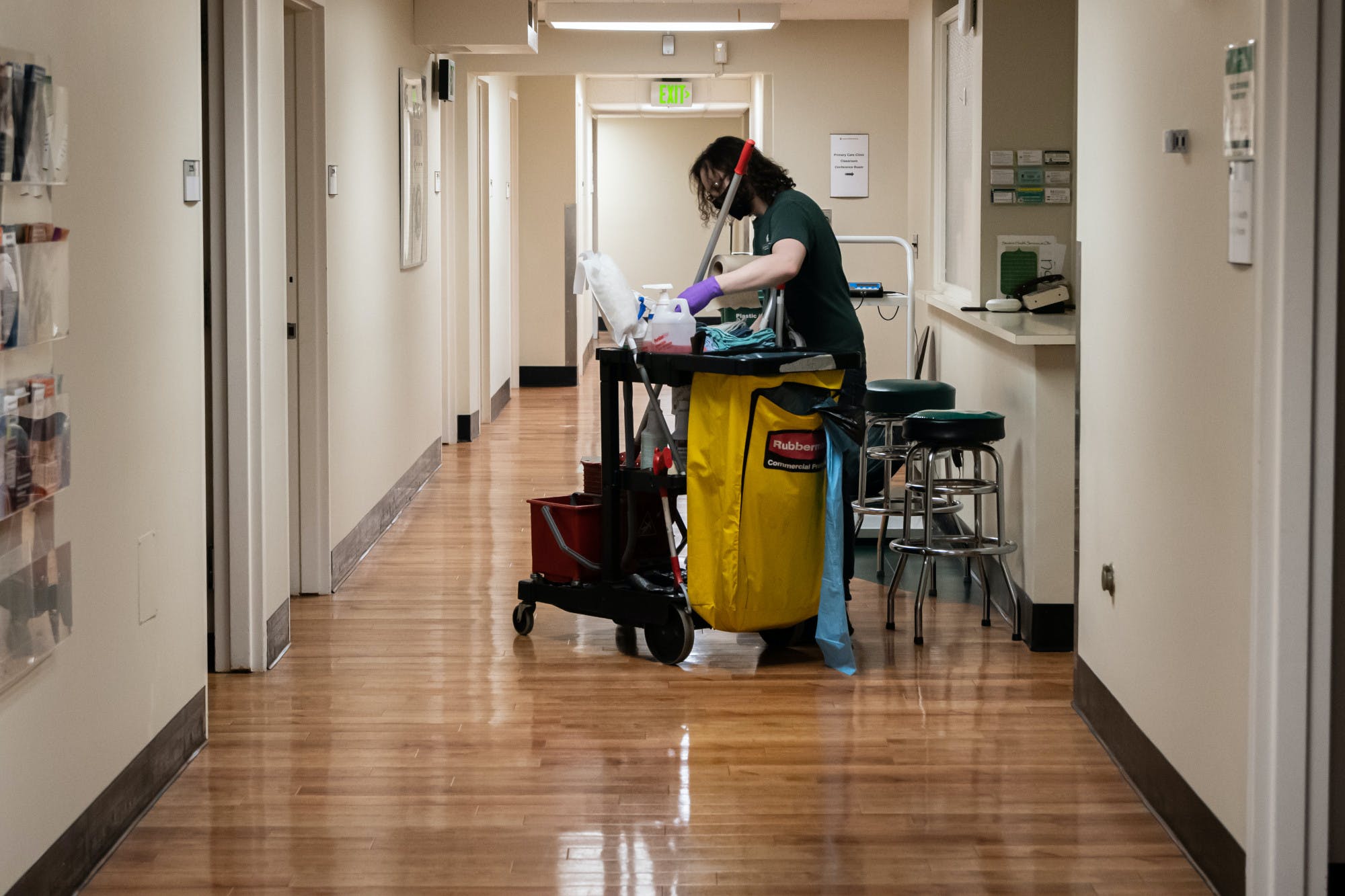 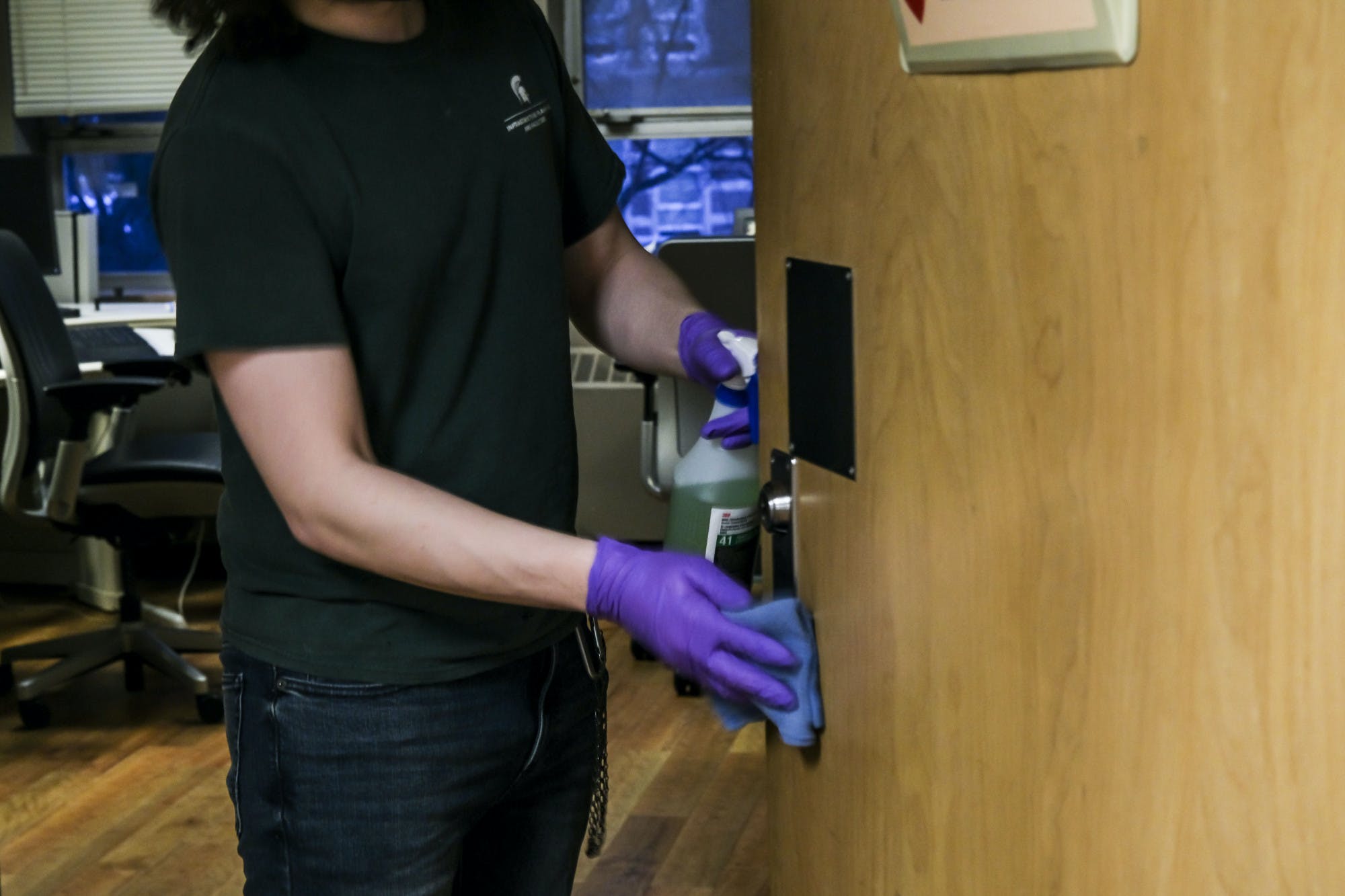 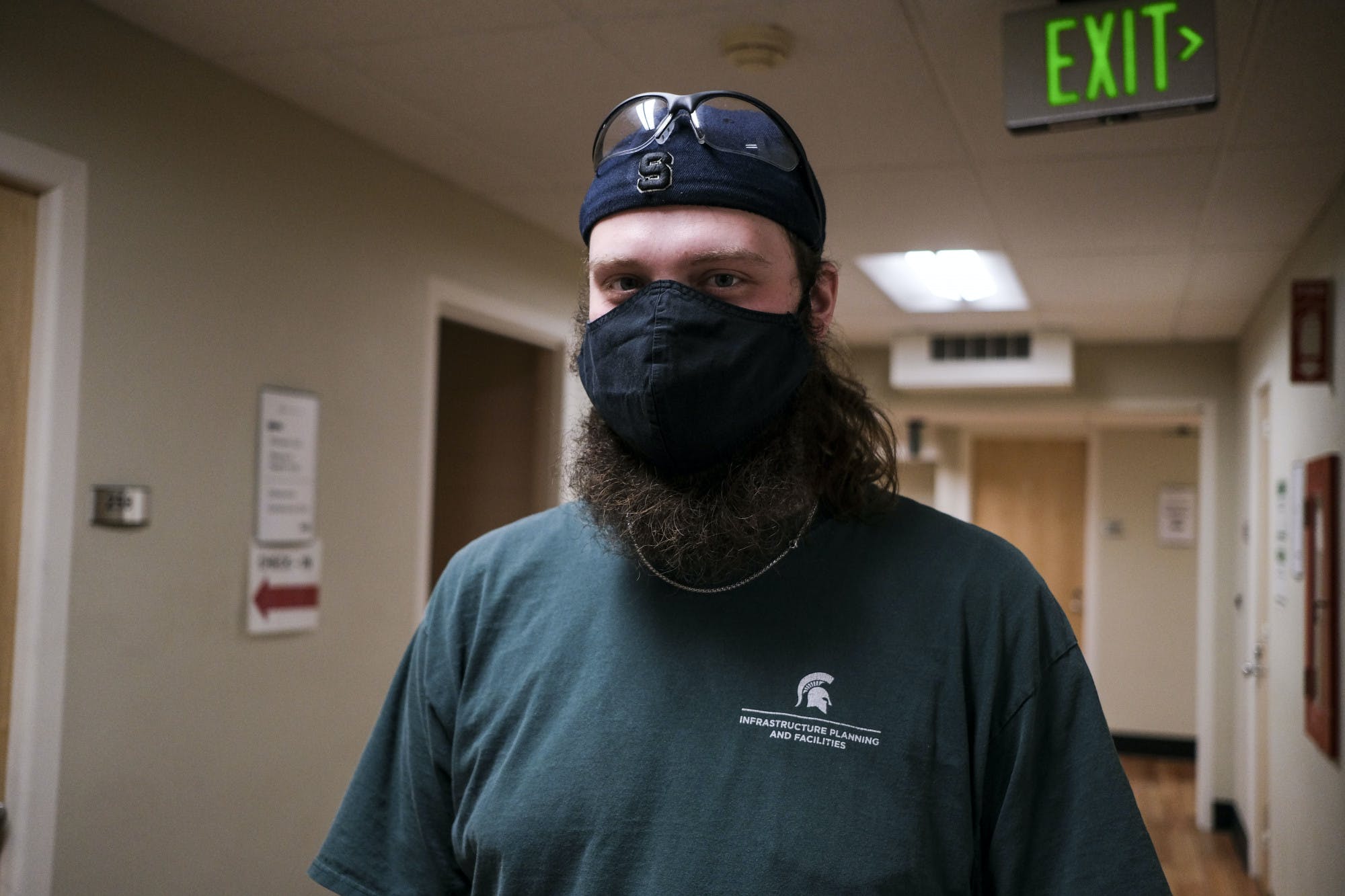 Despite having confidence in the health and safety protocols put in place, the pandemic is still having an adverse effect on workers' mental health.

"It's impacted me a lot," Segueda said. "I hardly ever see my immediate family. We're all pretty much, you know, keeping our distance from each other. I haven't seen my mom almost in a year since this whole pandemic started."

According to a study conducted by the Labor Center at the University of Massachusetts Amherst, 52% of all essential workers report that work has become more intense, causing strains on their mental health.

The main concern for most essential workers is not their own health but possibly exposing the people close to them in their personal lives.

"At first, during the initial onset, it was really scary because I have kids — younger kids — and being an essential worker, you obviously put yourself at risk," Antoin Moultrie, the operations manager for the Union, said. "You know, coming in and being worried about taking something home. So it was that risk, me being exposed — potentially exposed — to this virus and then bringing it back home."

"We get a lot of people who get the scares of 'they might have COVID,' or 'they have symptoms,'" Segueda said. "So they are taking the time off that they need to make sure that they're okay and their families are okay. The staff that's coming into work is going above and beyond their duties to make sure that the students have their food to eat and somewhere to go."

"I have kids — younger kids — and being an essential worker, you obviously put yourself at risk."

The workers have been selfless and accepting of the increased duty at work despite the increased pressure on them to protect themselves and others.

Moultrie, Serr and Segueda all said they feel an increased sense of pride in their work over the past 10 months as their responsibilities have increased to protect the MSU community.

"I want to make sure no one gets sick, no one," Moultrie said. "We stay safe, we stay open for the students, open for the general public, for them to have someplace to go, especially being locked away a lot in the house and not having a place to go. You probably go stir crazy, but here, you can come here and it's safe, it's clean. An environment for everyone to work and just get a break from being at home."

Segueda said that the culinary staff has embraced the increased importance of their role in students' lives and are proud of the services they can provide for students.

"That's essentially our whole purpose, to make sure that these students are safe, they're fed, and essentially, this is their home away from home," Segueda said. "So we're just trying to make them as welcome as possible. Yeah, we got to implement these rules, but I think we do a really good job at accomplishing that." 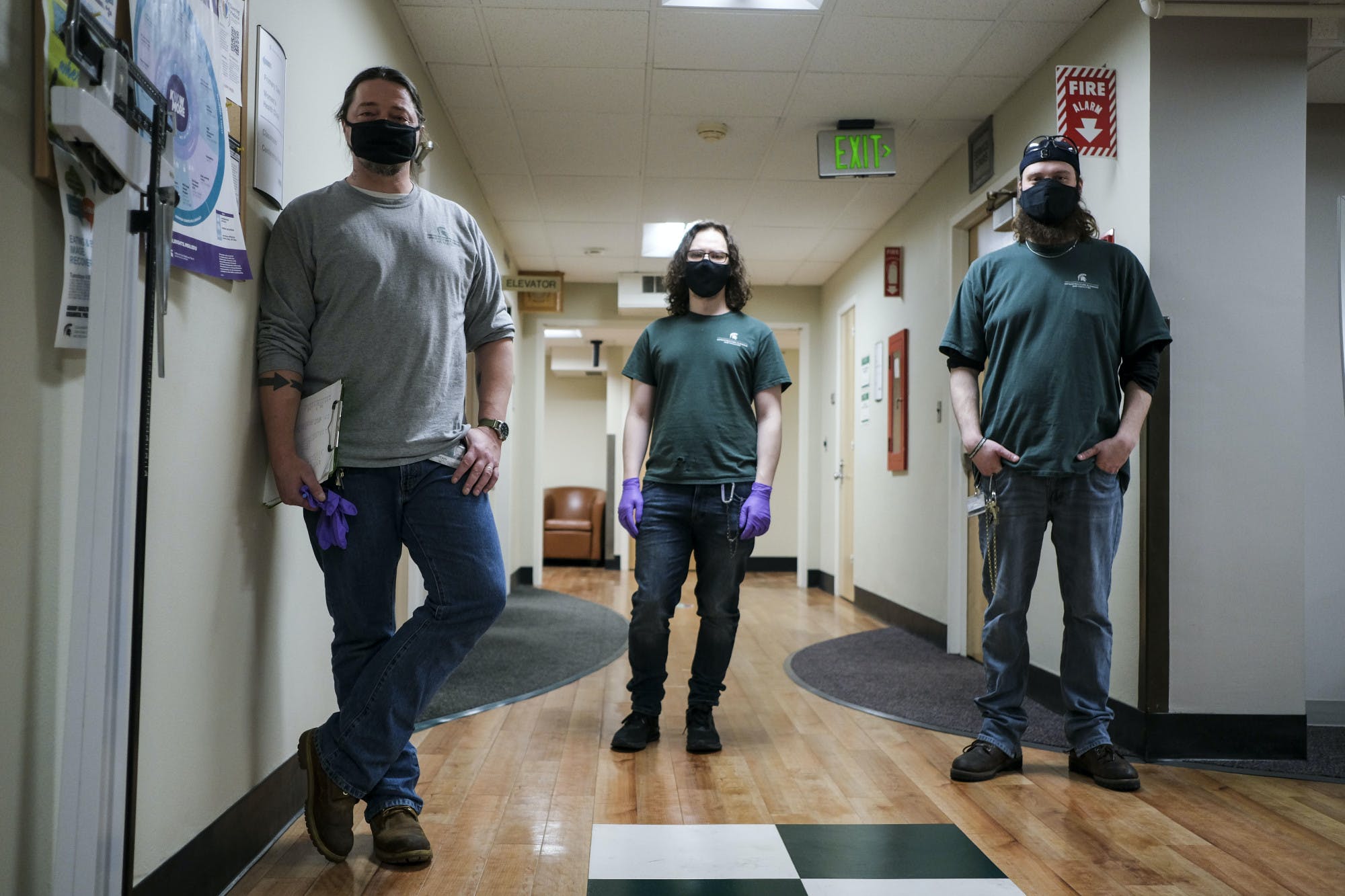 Serr said that he hopes to see some of the health and safety protocols that were put in place because of the pandemic to carry on when MSU returns to full campus capacity.

"The technology-based direction we've been taking isn't going to go anywhere," Gabriel Nichols, a custodian at Olin Health Center, said. "And I think it's for the best, some of it. Some of it is absolutely an improvement. It helped IPF move forward faster. We wanted to do all of this stuff, this (the pandemic) was just a catalyst for it."

Segueda said he hopes that MSU will continue to have increased safety protocols in cafeterias when all of the students return.

"I do like the fact that we're able to close between three and five (PM) to do a deep cleaning," Segueda said. "I think that would help out immensely during the school year, the normal school year, if we ever get a normal, whatever normal is now. I think about it a lot just in general, like with the flu and colds in the winter season, I think it would help just to sanitize different areas."

"It's going to be awesome to see all the students back in, and to get more student workers into the kitchen to help."

The essential staff said they are looking forward to being able to return to normal life at work.

Serr said that he misses face to face interactions at work and is looking forward to being able to work without a mask.

"It's kind of tough, you know, with the whole, not being able to give a hug to your sisters when you see them or your family members, and it'd just be nice to get some normalcy back with that," Segueda said. "And that's like in private. I think at work, it's going to be awesome to see all the students back in, and to get more student workers into the kitchen to help."

Cronkhite said she is thankful that she has been able to work when so many people have lost their jobs due to the pandemic. She is hopeful that the vaccine will allow everyone to return to work soon.

"I feel just really lucky to still have my job because I know a lot of people have been out of work," Cronkhite said. "And so in that respect, I feel pretty fortunate to be able to continue to work even if it is as an essential worker."

Editorial: MSU should continue to pay employees who lost jobs due to COVID-19

The State News Editorial Board

Column: We should rethink our views on essential workers of color

Corrections: Previous photo captions incorrectly identified Gabriel Nichols as Casey Serr. A previous version of the employment chart was mislabeled as "Infrastructure Planning and Facilities employees" rather than "custodial services employees." These issues have since been corrected.