The roles and responsibilities of MSU's Resident Assistants have changed dramatically during COVID-19, and some RAs struggle to feel fulfilled while being there for their residents.

During her freshman year, Resident Assistants strengthened communities and made connections in the dorms. This inspired current RA and nursing sophomore Lupe Grover and she felt that she could do the same.

Now, working as an RA during the COVID-19 pandemic, things look different from the job she had aspired to hold.

McDonel Hall RA and accounting senior Rylee Egan has been an RA since fall of 2019 after transferring to MSU from community college during her sophomore year. She said that this transition was rough for her, but it inspired her to be an RA.

"I didn't make all those connections you make as a freshman in those first year classes and experiences, and so I wanted to help connect my student residents more and help them transition a bit better than I did," Egan said.

Resident Assistants are typically expected to provide leadership and support to students and to help students adjust to the experience of living in a residence hall. 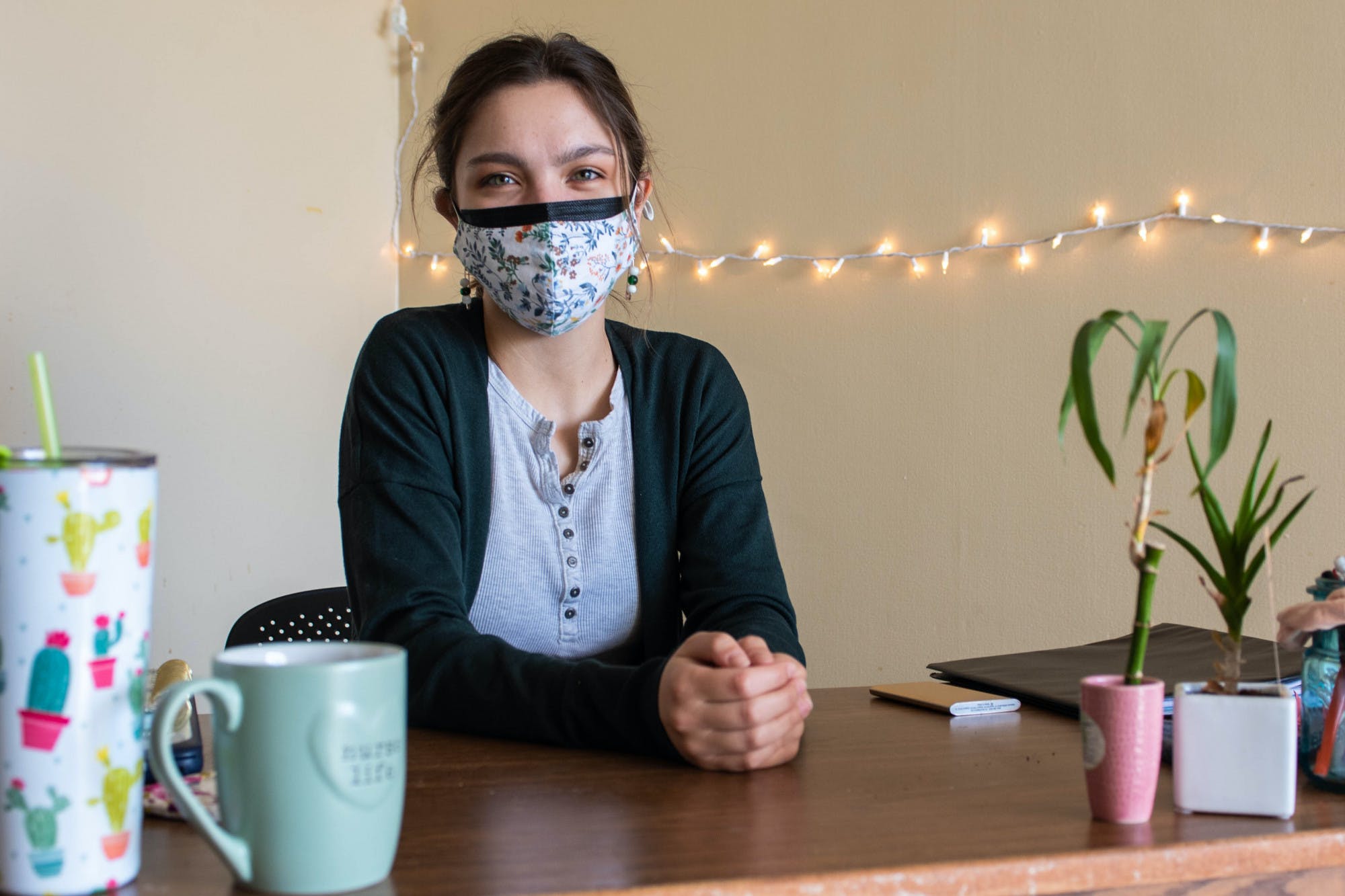 Lupe Grover, a resident assistant in East Akers Hall, sits at her desk waiting to see if she can assist any students living in the dorm. Shot on Mar. 6, 2021.

Now, Egan said her nighttime walks around a virtually empty building include making sure there were no parties, no big issues that need taking care of or unconscious students in laundry rooms and public restrooms.

Grover also said that she's noticed a change in her role as RA during the pandemic.

Originally, Grover was supposed to be an RA in Hubbard in the fall but instead decided to live at home due to the COVID-19 pandemic. She now lives in Akers. Grover said that having to tell her residents that they can't be together is the worst part of her job.

But Grover was prepared for a tough semester and understood that her role as an RA would be vastly different.

"I wouldn't say I'm disappointed because I knew what I was signing up for, but it's a change in what I wanted to do," Grover said.

With even more students on campus this semester, Egan said that it's been hard to understand what her residents need.

"Everyone currently has a different change in their support system and their routine, and we're trying to make events that would fit everyone and make sure we're offering the right type of support to everyone," she said.

Bethany Balks, associate director of communications for Residential and Hospitality Services, said in January that 3,800 students returned to Michigan State University to live in dorms this spring, following a "distraction-filled" fall semester at home.

The previous semester had only 2,000 students living on campus.

Egan and other RAs use virtual one-on-one meetings, called "res chats," with their residents to make sure things are going well. She said that communicating with her residents this way is actually easier this semester. Because of the lack of in person classes, most students have an abundance of time to schedule a res chat. 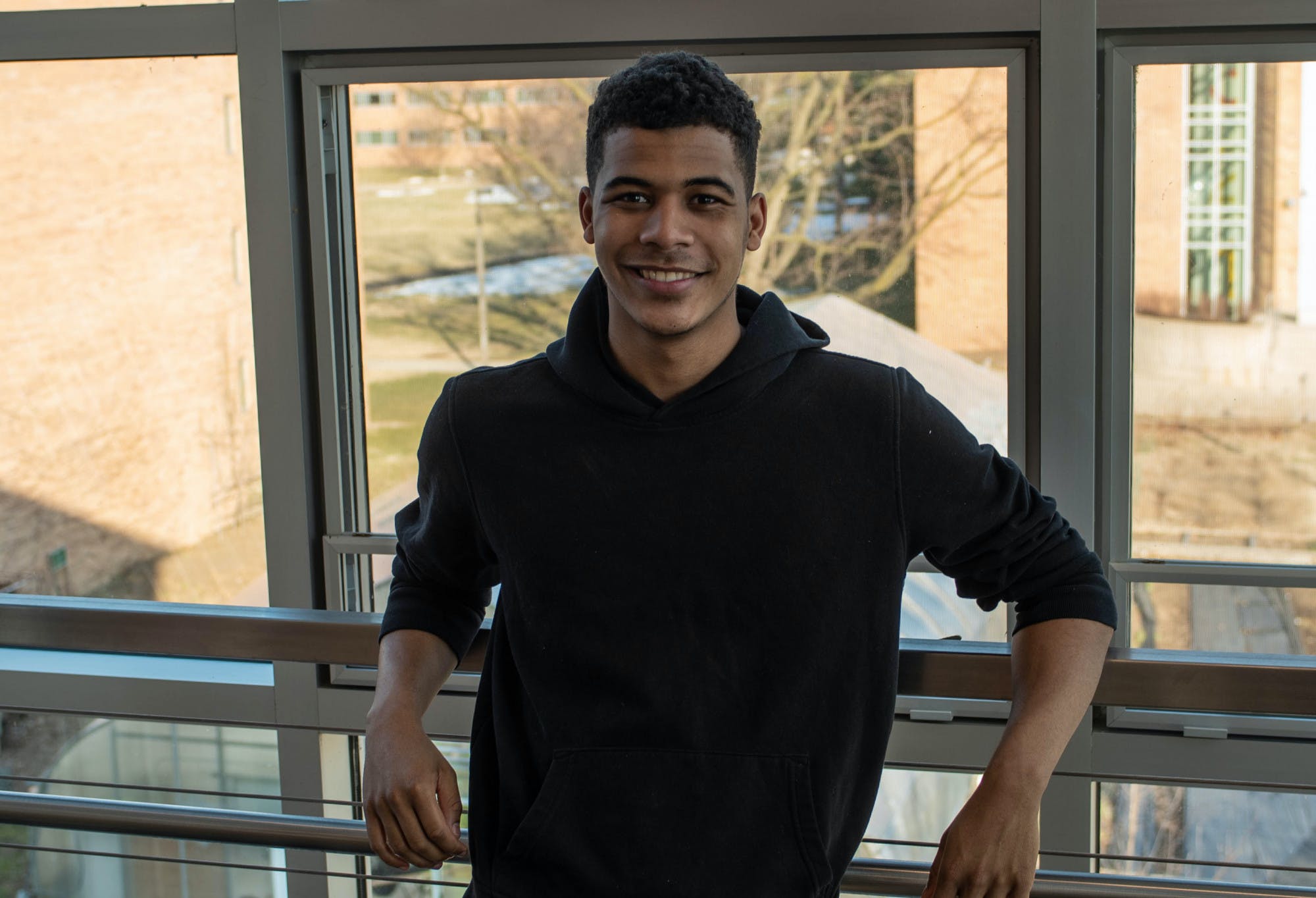 Jason Wright, a junior resident assistant in Bailey Hall, poses in the stairwell looking over the Bailey Greenhouse. Shot on Mar. 8, 2021.

Egan said that her sense of fulfillment for her job changes every day. Some days she feels burnt out, and other days she feels like things are a bit closer to normal. However, she said that she does not feel overwhelmed.

Bryan Hall RA and political science junior Jason Wright said he worked for 10 days this fall before students were asked to stay home for the fall semester. Now, still in Brody Neighborhood, Wright said that he did not like his role as an RA at first.

Like Grover, Wright said that he often felt left out of his residents' lives, and that he felt more like an enforcer of rules than someone who is meant to bring a community of MSU students together.

"I didn't become an RA to be a hard person on everybody," Wright said.

Now, Wright said that he loves his job. He said that the parents of some of his residents gave him a shoutout on their Facebook group, and a few students have told him during their one-on-one sessions that he has made a difference for them and that they appreciate what he has done for them.

Wright and his fellow RAs have a variety of events planned for the future, including an opportunity for residents to play the popular video game Among Us together, as well as a Brody Neighborhood snowman building contest.

"It makes me feel really good that I'm making a positive impact on some of these people's lives and helping them to know that we're almost out of this," Wright said. "Stay hopeful, and I promise it'll get better."

Neuroscience senior Dhaval Gandhi has had a more difficult time getting his residents to get involved.

Gandhi is an RA in Owen Hall, which is a graduate hall in the River Trail Neighborhood. He said that he had heard that residents in graduate dorms were more willing to participate in activities, but that this year this has not been the case.

Gandhi has been a Resident Assistant for three years now, and he said that residents are more stressed out than he has ever seen.

"I didn't feel as connected to my residents, and I know ... they haven't felt very connected to me or campus at all," Gandhi said.

During a normal year, Gandhi said he would have a meaningful interaction with a resident every one or two weeks, which was usually a conversation about something they were passionate about or a personal struggle of theirs. Now, he said, he has had only three or four of those interactions in the past year. 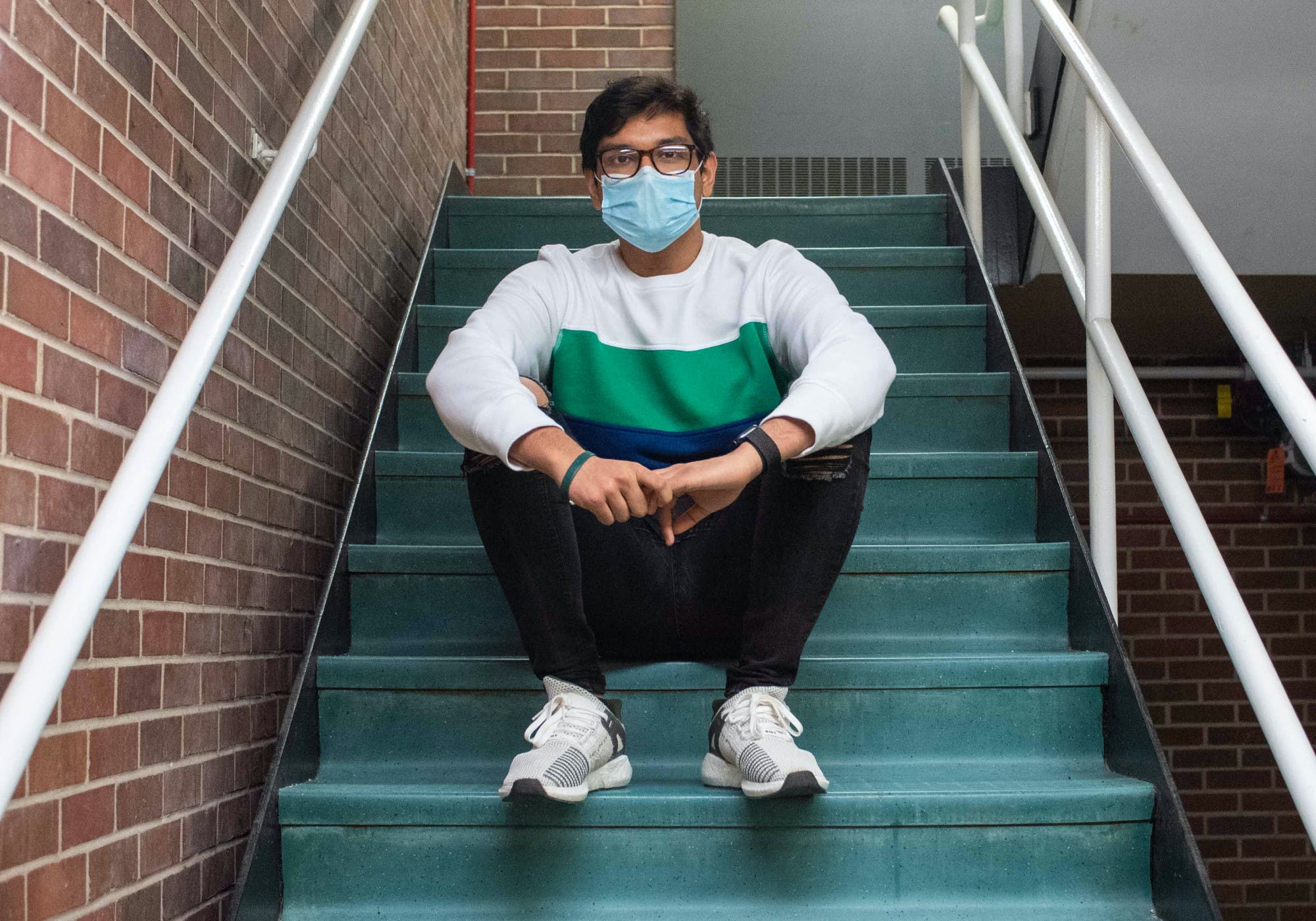 Dhaval Gandhi, a resident assistant in Owen Hall, poses on a staircase. Gandhi said the worst part about being an RA during the pandemic is that "you don't get to build connections with the students on the floor." Shot on Mar. 6, 2021.

However, Gandhi said that there was a clear difference between this semester and last semester. He gained around 15 new residents, conversations in his floor group chat flows naturally and students are settling back into a slightly more normal college life.

"There are some residents you can never connect with and that's OK," he said. "But the ones that you do connect with, you actually form genuine friendships and relationships with them."

Resident Assistants try to find ways to connect with their residents and strengthen ties between students during what may feel like a fractured campus experience.

Many RAs got involved with the job out of a desire to improve the lives of the students around them, and they continue to do so, even as a pandemic stresses the connection between student and campus.

For now, MSU's RAs will adapt, look to the future and do their best to help their residents do the same.

Despite the challenges he has faced, Gandhi has found his job experience to be devoid of any serious issues.

"There's nothing to complain about," Gandhi said. "It's a lot of meaningful work."

3,800 students return to MSU dorms ahead of spring semester

The State News Editorial Board

MSU students share thoughts about dorm life during the pandemic